The new field of research "affective computing" investigates and develops technologies that recognize, interpret, process and simulate human affects. Favored by the technical possibilities concomitant with the "Internet of Things" and the wearable commotion, we thus see the beginning of a new class of devices on the market, so-called "affective wearable" which operationalize and convert the users emotion into emotional data.
Dealing critically with this new dimension of data ascertainment, "emotive“ explorers a self-defensive wearable device to enable a user to protect his/her emotional privacy in terms of both data and space. It shields the wearers emotional state by masking the mimic expression, which is considered as one of the most indicative and most lightly accessible correlate of emotions. Simultaneously it shapes a protective, private, emotional space, affording a new possibility of engagement with the personal, subjective experience of emotions. 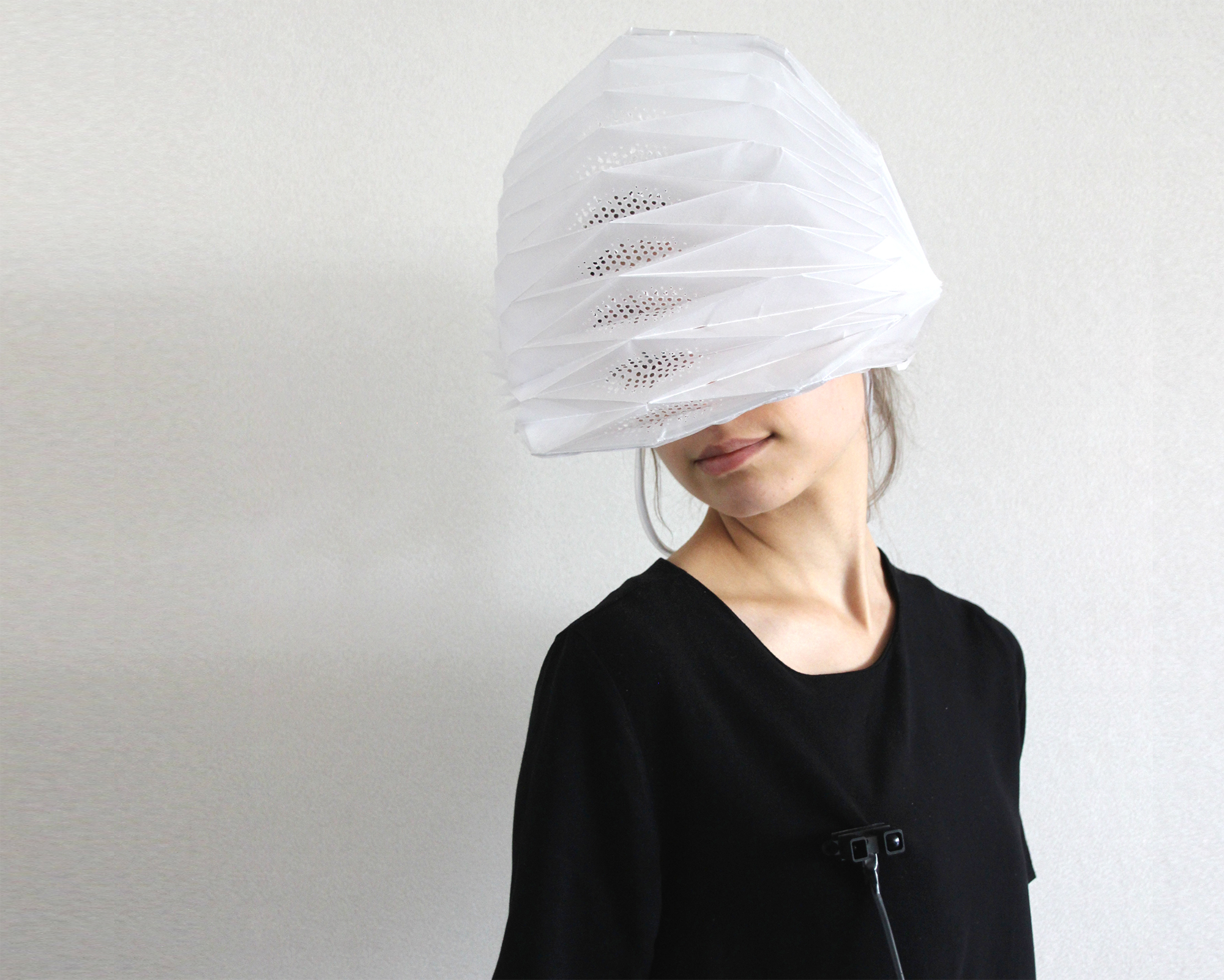 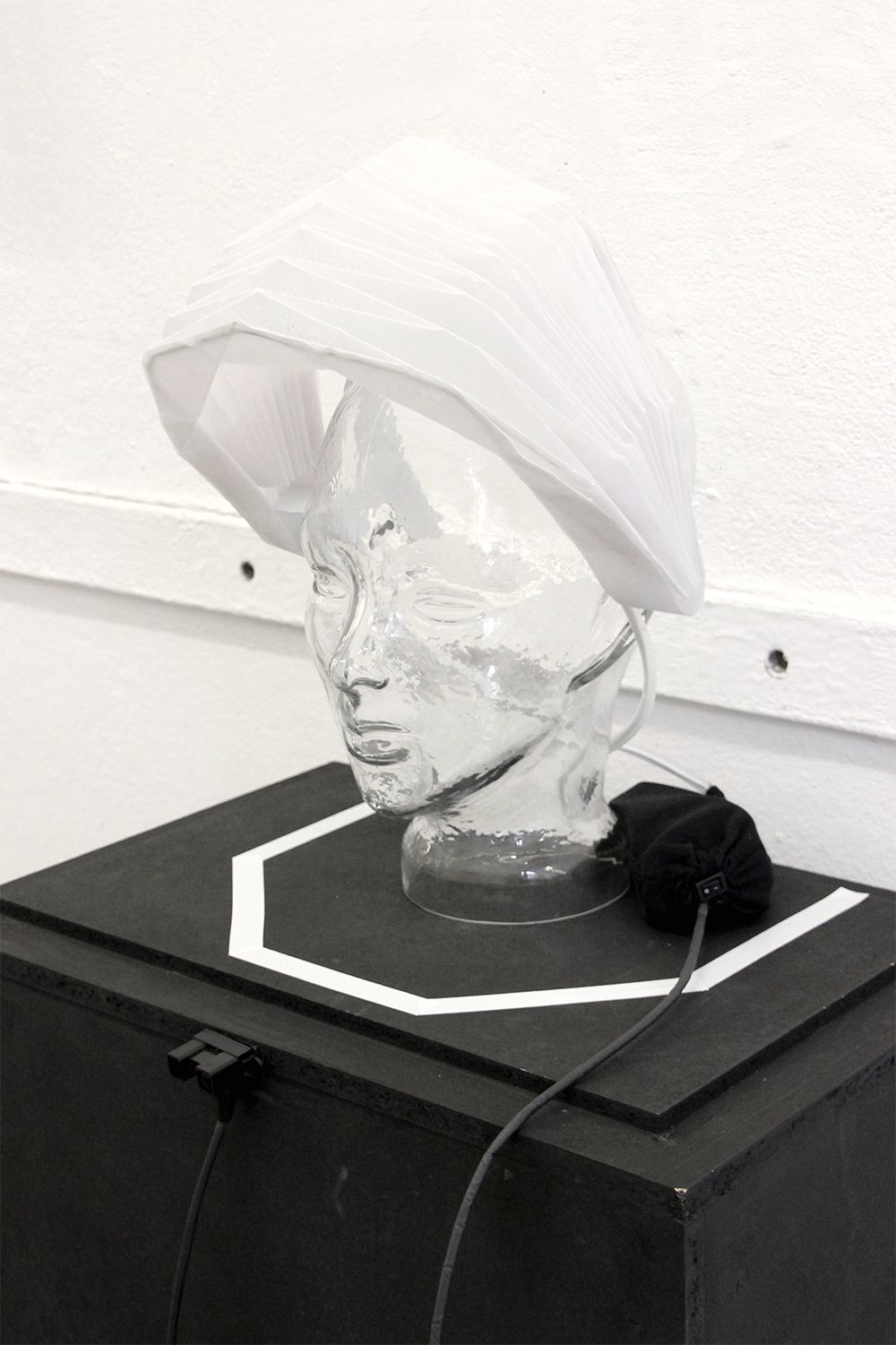 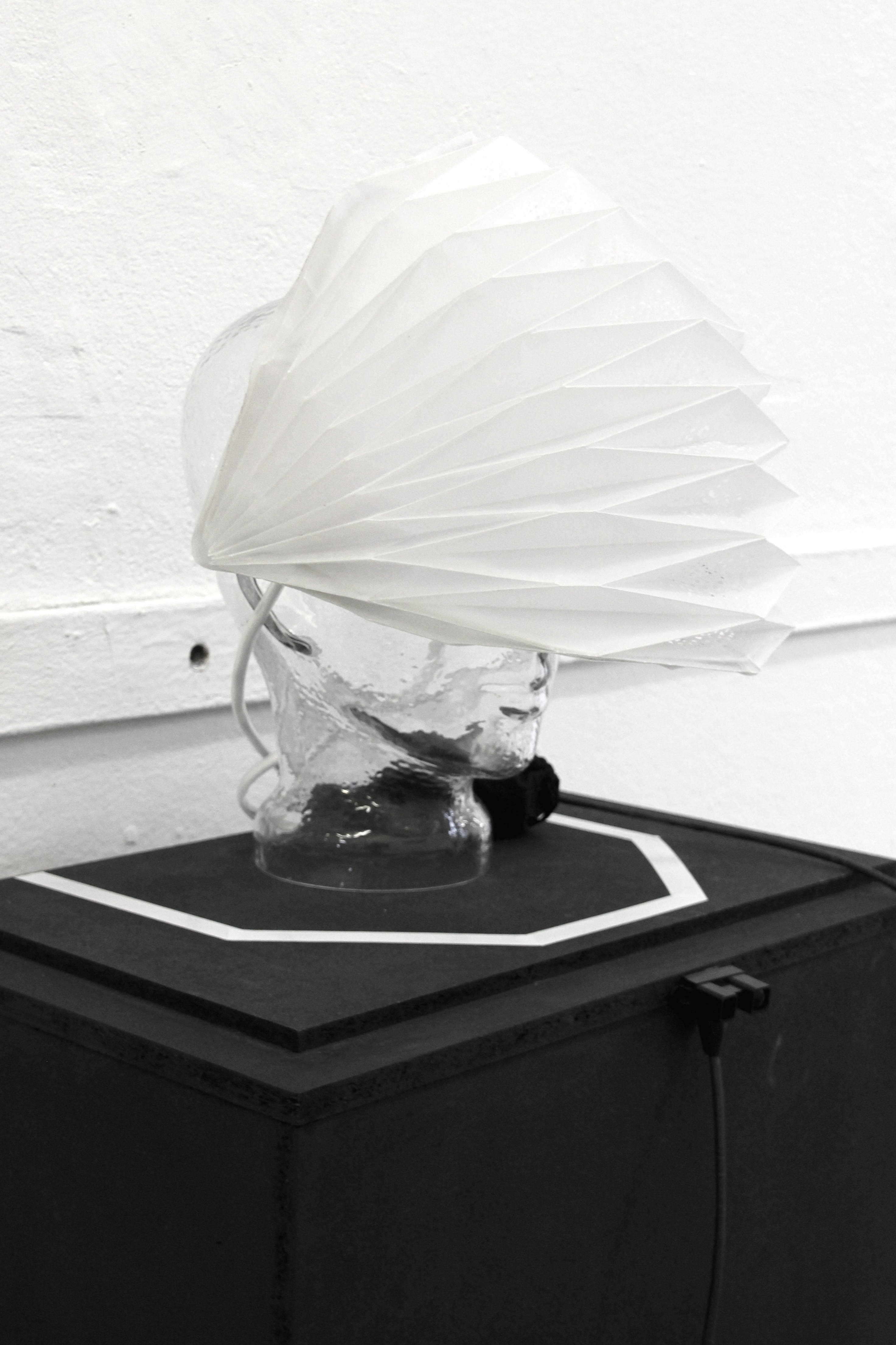 In the age of the Quantified Self movement and the Ubiquitous Computing the permanent capture of physical data by means of portable technologies is already legitimate. However, the ambitious research field of affective computing still goes one step further: Affective technologies should grasp the users emotional states in real-time, interpret it and react appropriately to it. Therefore we currently see a new class of devices on the market – so-called "affective wearables" – which grasp affects and transfer them into emotional data. The emotion analysis is based on the identification of motoric as well as physiological reactions, which correlate with differentiated emotions and specific models of emotional pattern so-called "Affective Pattern".
Thereby the facial recognition is considered to be the most natural, by its visibility most simply accessible and therefore most significant non-verbal form of the human emotion expression. Smallest movements of the mimic musculature are grasped by affective systems as "action units" and decoded by means of suitable algorithms with a success rate of 70-91%. Considered as not measurable, subjective phenomena, feelings thus are reduced to physical signals and are transformed in measurable quantity. Emotions become Big Data. Therefore, such technologies open a new dimension of data collection, as well as potential danger of privacy and data abuse. The wearer not only loses the control of the metrification and interpretation of "emotional data", but also of the impact which information becomes accessible to whom. Instead of trusting in own, subjective feeling, emotions are calculated by objectively and rationally rated systems and the engagement with the own emotional feeling gets partially lost.

The practical part of my bachelor’s final project aims to light up the doubtful aspects of affective wearables and deals critically with the Operationalisierung of emotions likewise the increasing emotional transparency. The audience should develop a consciousness for the physical manifestation of our private emotions, frame of mind and moods and should realize the danger of the emotional assessment.
The basic idea is to develope a dynamic, portable system which contrary to affective wearables do not ascertains emotional data of the wearer but instead protects the wearer against the emotion capture by the analysis of the mimic expression. Besides, the wearable should generate an "emotional" space which enwraps the user and offers spatial for a self-reflective, intimate discussion with the own emotions. 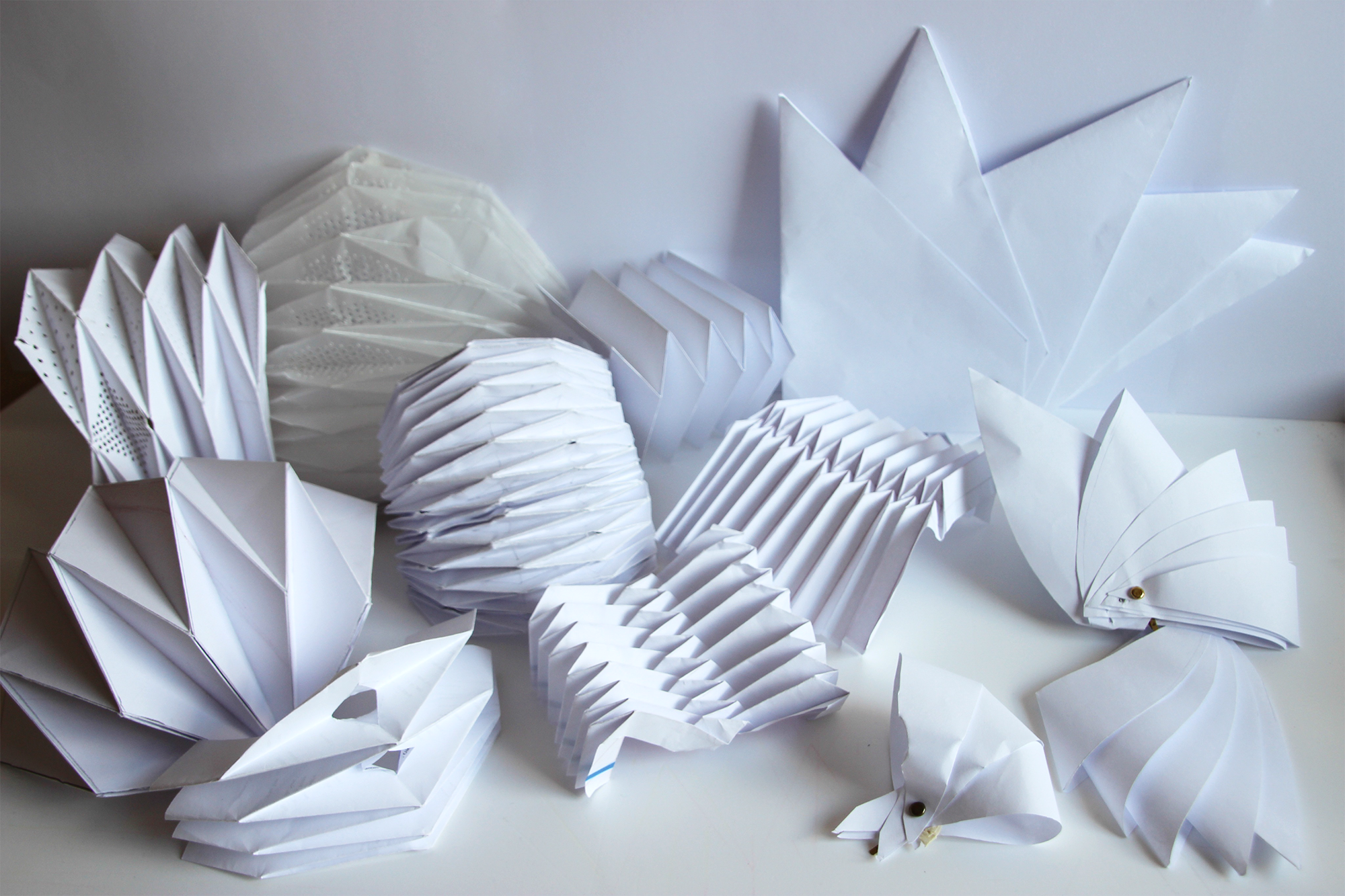 The basic components "emotives" is built out of are: an substructure PVC formed scaffold, a translucent, perforated, paper-folded head segment, some wire brackets, two servo motors, a distance-apprehending infrared sensor as well as an Arduino microcontroller-board, driving the interaction and the technical elements.

The movement and kinetic transformation of "emotive" base on the study of the impact of the use of space on interpersonal communication defined by Edward T. Hall. Under the concept of the "proxemics" the anthropologist defines four interaction rooms to which most people equalize their communication behavior: an intimate, personal, social and public space.
According to Hall each individual has a personal reaction bubble comprising a circuit of 120-45 cm that is reserved for close people, as for example good friends and an intimate area below 45 cm enclosing all intimate, personal as well as emotional interactions, touches and contacts.

One can argue that affective wearables intervene both in the personal and intimate zone of a person An unjustified intrusion of strangers in the intimate or personal space leads to defensive reactions and an uncomfortable feeling. Breaking through the confines of the wearers personal or intimate area induces the protectable movement of the wearable, adopting its shape to the distance grasped by an infrared sensor: The personal distance of 120 cm thereby forms the wearables furthest field of reaction, starting the locking mechanism. Within the interaction space of 120-45 cm the closing angle is calculated, dependent on the distance to the penetrating person. Crossing the distance of less than 45 cm leads to entire shielding, protecting the wearers privacy concerning the emotional data and as well as the created space. 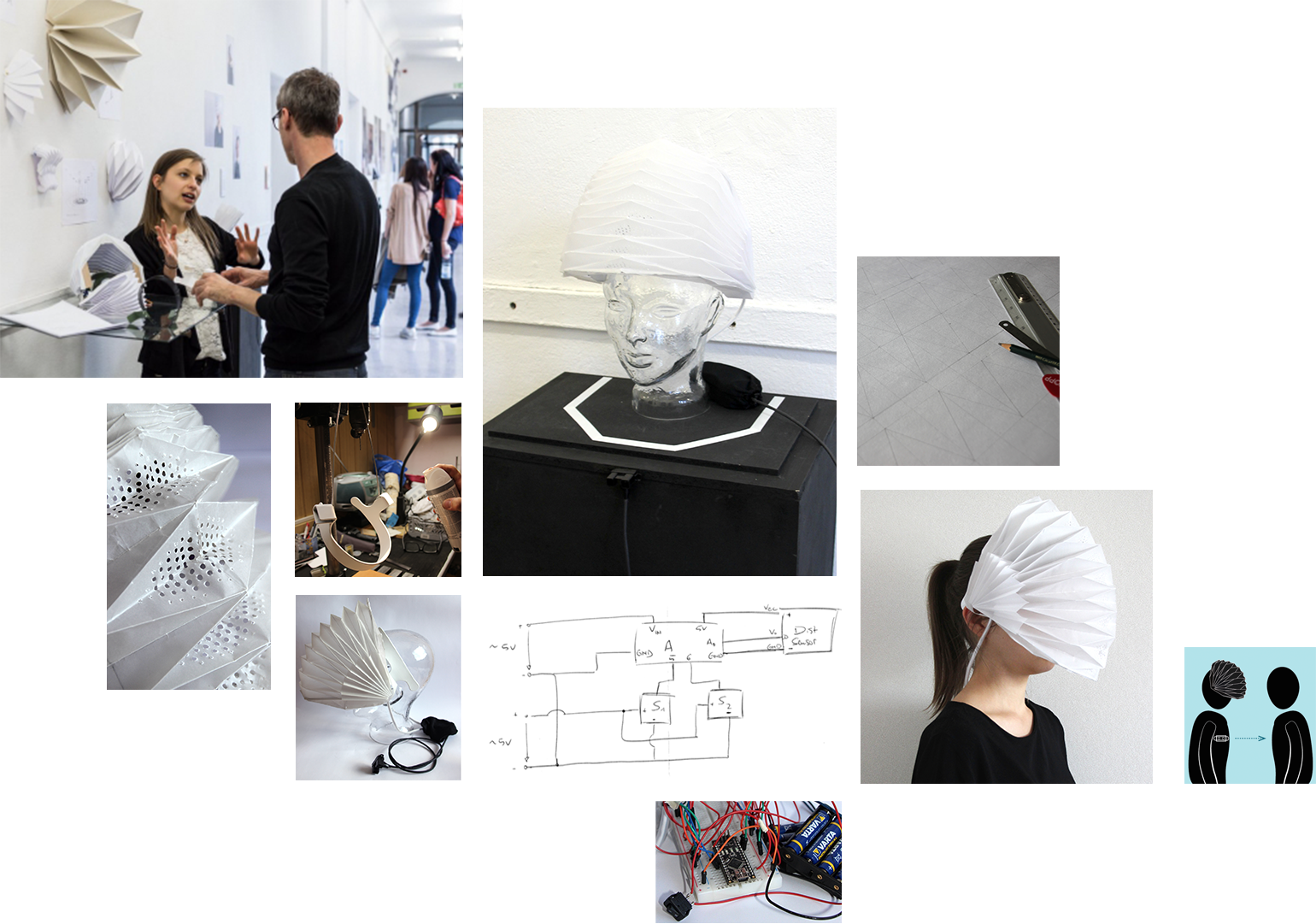